Prophets and Priests: On Aspirations and their Demise

In the center of Jerusalem hangs a bell which has never tolled. It is a replica of Philadelphia’s Liberty Bell, crack and all. Both are inscribed with a verse from this week’s Torah portion:

The inscription exposes the prophetic calling which lies at the center of both nations. Anything but normal, it prescribes the nation a redemptive role. Some consider the inscription the source of a dangerous and blinding national ego-trip, others as a wellspring of an exceptional and inspiring ethical vision. The crack is symbolic: Both countries struggle over the gap between their highest aspirations for themselves and the reality outside.  This tension between aspirational and possible, between de jure and de facto, is a drama which unfolds in our weekly portion.
Biblical Context is helpful here. Our verse appears in the most aspirational of commandments: the mitzvot of Sabbatical year (Shmitta) and Jubilee (Yovel). The darling commandments of financial interventionists the world over, this Biblical duo command that

After seven cycles of such Sabbaticals, seven times seven: 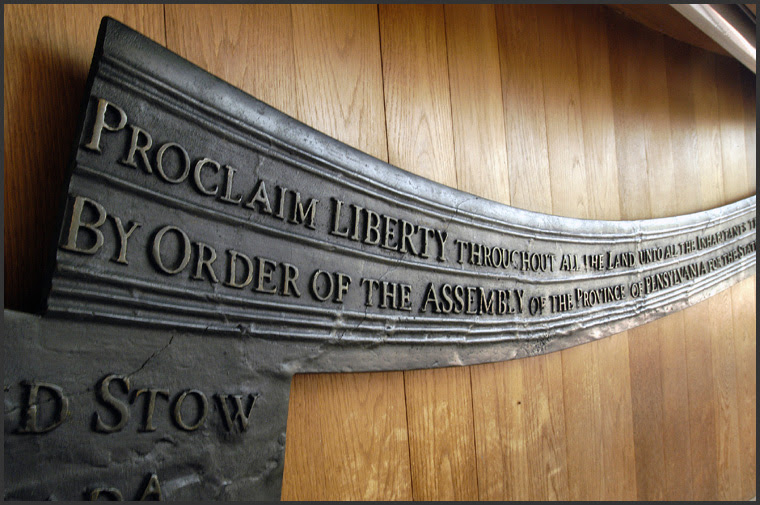 A quick refresher:  Every seven years Shmitta calls for a cessation of all agricultural work and a remittance of all slave ownership (and of all debts, throws in the book of Deuteronomy. This coming year will be a Shmitta, so you might want to think twice before acquiring a slave). Every fifty years a remittance of any real estate transactions ensues, alongside a second year of agricultural remittance. The Torah commands a “reset” of the economy requiring each person to “return to Go and collect $200”. If you are unfortunate enough to have acquired more than the amount of money given you at the beginning of the game – you must return all properties, houses and hotels to the bank (Monopoly, the Shmitta version, is bound to be a hit). Shmitta and Yovel are the touchstone of the Torah’s strategy to fight poverty in an “For the land shall not be sold in perpetuity for the land is Mine; for you are strangers and settlers with Me” (ibid 25:23-24). 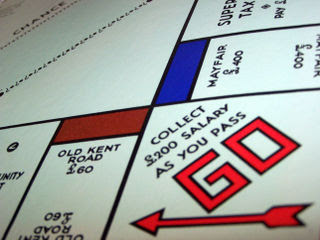 agrarian society – as much as it is about creating a theological awareness that human ownership is counter-redemptive.
Did we mention it’s an aspirational commandment?
So aspirational in fact, that later generations had to work overtime to tame it. Rabbinic legislators, concerned that Shmitta would undermine the healthy functioning of the economy – loans would be withheld, neighbors would refrain from business - pillaged the Sabbatical year of most of its content. To this day a community’s response to the sabbatical year is a litmus test of its Jewish engagement: in Israel it creates political uproar. In America it generates a swarm of new-age initiatives. Most people shrug their shoulders and move on with their lives… (Snarkiness aside, I’m an admirer and aspiring practitioner of modern re-interpretations of Shmitta, like this one from Hazon).
The Jubilee did not fair as well. Jews essentially lost count of when the Jubilee year is somewhere between the first and second temple. No one seemed to shed a tear.
The fate of Shmitta and Yovel, like the aspirations of Israel, America and many other well meaning  projects, fell prey to the social dynamic which one Jewish essayist labeled “Priest vs. Prophet”.
Ahad haAm (1856-1927, aka Asher Ginsberg, literally “One of the guys”…), Russian auto-didact, serial newspaper editor and founder of Cultural Zionism, dedicated his life to translating the concepts of Jewish religion to a secular age. In his essay, “Priest and Prophet”, Ahad haAm turns these two obsolete servants of the Lord into timeless leadership types: 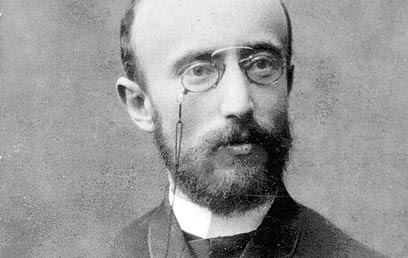 In the early history of any epoch-making idea there have always been people who have devoted to that idea, and to it alone, all their powers, physical and spiritual. They make the new idea a primal force; and the social equilibrium, being a product of the struggle between all such social forces, is, therefore, bound to be affected by this new force. But just as no one force ever obtains a complete and absolute victory, so there is no original idea that can hold its own unless it is carefully guarded by its adherents.
There are thus two ways of doing service in the cause of an idea ; and the difference between them is that which in ancient days distinguished the Priest from the Prophet.

The Prophet is essentially a one-sided man. A certain moral idea fills his whole being, masters his every feeling and sensation, engrosses his whole attention. He can only see the world through the mirror of his idea… His whole life is spent in fighting for this ideal with all his strength ; for its sake he lays waste his powers, unsparing of himself, regardless of the conditions of life and the demands of the general harmony. He remains always a man apart, a narrow-minded extremist, zealous for his own ideal, and intolerant of every other…
It is otherwise with the Priest. He appears on the scene at a time when Prophecy has already succeeded in hewing out a path for its Idea. But the Priest has not the strength to fight continually against necessity and actuality; his tendency is rather to bow to the one and come to terms with the other. Instead of clinging to the narrowness of the Prophet, and demanding of reality what it cannot give, he broadens his outlook, and takes a wider view of the relation between his Idea and the facts of life. Not what ought to be, but what can be, is what he seeks. (Ahad haAm, Priest and Prophet, 1893)

It seems that Shmitta and Yovel, those grand ideas set into motion by the Prophets, was handed off to the Priests, who promptly forgot one and gutted the other… We could play out Ahad haAm’s analysis on a wide variety of social change movements today. Indeed the Priest is easily identifiable as our neighborhood politician, earnestly serving a grand idea, but constantly sacrificing the idea on the altar of reality. The Priest is a master of “the art of the possible”.
But who is the prophet in today’s terms? Where does tenacious inspiration, battle for a core idea, unflinching zealotry appear today? “Said Rabbi Yohanan: Since the destruction of the Temple, Prophecy has been taken away from prophets and given to babies and fools” (Talmud Bavli, Bava Batra 12b). Babies and fools? Perhaps religious extremists and a handful of vegans. Does Western society still have a shot at finding prophets?

Greil Marcus, cultural critic best known as the biographer of Dylan, Van Morrison and Elvis, points out that the American prophetic voice was always a key of American leadership. He highlights the self-critical assumption guiding such canonized notables as John Winthrop, Abraham Lincoln and Martin Luther King. They all believed that “the nation was made to judge itself in a court the country would have to convene over and over again” (Marcus, “The Shape of Things to Come:Prophecy and the American Voice”, pg. 14). But since then the prophetic voice has disappeared from the political and civic discourse. It re-appears today only in the works of artists, novelists and filmmakers (Marcus finds it in Phillip Roth, Allen Ginsburg, David Lynch and a handful of pop-culture icons I hadn’t encountered before…).

What such prophets have is the ability to judge the nation based on its aspirations for itself in a way that resonates and moves the people. They rang the bell of liberty, letting the inscription on the shell reverberate throughout the nation – and then challenged that nation to stand up to its promise. “We have come to our nation’s capital to cash a check” as King put it (pg. 30. In Israel, Meir Ariel rang that bell best of all, see last year's post).
At the end of the day, stuck between de facto and de jure, de facto will probably win. We need our priests – God knows I am more of priest than a prophet myself… And yet, as Shmitta rolls around next year, perhaps we can let it push us in the direction of de jure once again. As Ahad haAm puts it in his essay – the prophet knows he will not win, but he pulls nonetheless:


The fundamental idea of the Hebrew Prophets was the universal dominion of absolute justice. …Justice for them is beauty, it is goodness, wisdom, truth: without it all these are naught… The ideal of the Prophets is to pull practical life in the direction of absolute Justice — an ideal for which there can never be a complete victory. (Ahad haAm, ibid)
Posted by Unknown at 4:27 PM No comments: