Being an Angel or a Broken Hill: Singing Leonard Cohen on Yom Kippur 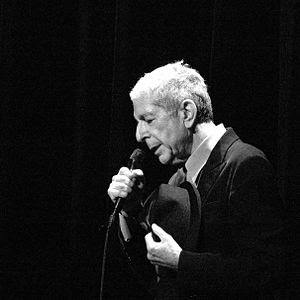 Purim, obviously, is the big costume shebang of the Jewish people. But the well kept secret of the Jewish holiday cycle is that it is Yom Kippur – the Day of Atonement – which outweighs Purim where costume and camouflage are concerned. It's a truth based in a pun, the hebrew word for Yom haKippurim - יום הכ-פורים means not just “day of Atonement”, but the “Day which is like Purim” - ke-purim. Look closely on Yom Kippur night: we get dressed up as our best selves on Yom Kippur – feigning remorse and regret, promising between clenched teeth that we will never do it again, beating on our chests with fingers crossed: no more lying, no more betraying, no more pastry. The customs of Yom Kippur outline the costumes: we dress in white, stand as much as possible, don't eat, drink or procreate – we are in role as angels. If we dress up as angels, promising to behave as such throughout this year, the Almighty will have mercy and we will be granted another year of life.

Thus goes the pro-angelic line anyway, that Augustinian desire to turn human beings back into angels (or at least, nuns), like we were before that woman ate that apple...
But within Jewish texts lies another perspective, a radically different one, and it is articulated beautifully by two poems: one from the 7th century, and one from the 20th.
The first poem is recited on Yom Kippur afternoon, when communities recite the following song, written in 7th century Byzantium. The poem (known as “Asher Eymatcha”) keeps switching perspectives between the hosts up high, and the masses below. It describes how God – despite having myriads of awesome angels – actually craves praise from us - sordid, mortal, lying, human beings:

Why does God desire humans over angels? As the Rebbe of Kotzk put it succinctly: “God doesn’t want more angels. He has enough angels. Angels are boring – they have no choice. What God wants is human beings. And being a human being is so much harder…”
The irony is that while we are still stuck in the assumption that what is asked of us on Yom Kippur is to assume our inner angel, what this day is actually about is being truly human. This point, that we are to sing from our brokenness, not from our fake perfection, is perhaps best epitomized in a poem by the great rebbe from Montreal, Reb Aryeh Leib HaCohen, also known as Leonard Cohen. While this song has yet to make it into the liturgy of the High Holy Days, in the small synagogue of aging hippies and outlying kabbalists that I grew up in this poem was a staple of our Yom Kippur prayers. Its chilling tune puts me in Yom Kippur mode whenever I hear it being played:

The path to praising God is more complicated for Cohen then it is for his Byzantine precursor. Hebrew prayers open with “May it be your will”, but Cohen can only muster an “if”, if it be your will, if there is a Divine will... In truth, all prayers since 1945 should start with the disclaimer “if”.
But it is easy to ask questions about divine will. Yom Kippur is first and foremost a day to examine our will. What is my will? How often do I act out of that will, and not just reacting to whatever falls in the inbox of my life? “If it be my will” – what is my will for this new year?
In his second line, Cohen puts us at our most fragile and dependent, focusing God’s will on our very ability to speak: "If it be Your will / That I speak no more" - reminding us that those things we take for granted can just as easily be taken from us, forcing us to “abide until I am spoken for”. Not a usual feeling for our agency-filled psyches. Achieving awareness of our own fragility is half the work of Yom Kippur.
It is that fragility that is the source of power in this song. While our Byzantine poet goes throguh a long list of metaphors for the human condition, Cohen catches it best: “From this broken hill / I will sing to you. From this broken hill / all Your praises they shall ring / if it be your will / to let me sing”
As opposed to the grandeur of some houses of worship, Cohen’s God seeks praise from broken hills, not from fantastic edifices. In fact, it is us who are the broken hills. To be sure, we are hills, standing far taller than all other creatures; we are capable of the most fantastic achievements. But on a day like Yom Kippur, we remove the masks our super-human powers, and admit our brokenness. Our fragility and mortality are not something to be hidden, to overcome, but rather something to be embraced, and to seek transcendence from there.
The song ends with some strange references. The Binding of Isaac is there (“draw us near, and bind us tight”), but I'd venture that so is the banishment from Eden:  “All your children here / in their rags of light.” When Adam and Eve, those first children, discover their nakedness, God makes for them garments of leather, Or. The Talmud says that in Rabbi Meir’s Torah, it spelled the word Or with an alef, meaning not עור, leather, but אור, light. Rags of Light. The moment of our greatest human shame is also the moment of our greatest human possibility, transcendence, luminescence. Rags of light. Rhymes with night. The rest of the year we try our best to pretend that it is day, and that we are immortal. But on Yom Kippur, standing in view of our out “putrid deeds” we admit it – it is night. Human civilization, for all its glory, is still mostly in darkness, poverty and injustice. Here we are, in our rags of light. Let’s end this night. If it be your will.