Returning to our Senses #2: Mouth

Exploring texts and inspirations about our sensory organs, as a path to approaching Teshuva. This second piece reflects on the mouth. (Check out #1: Eyes).

Death and Life are in the hand of the tongue,
and those who love it will eat its fruit. (Proverbs 18:21)

Our mouth is a most curious anatomical beast: a vacancy, a receptacle holding lips, teeth and tongue. It is rare among our organs in being both an input and an output mechanism. Eat-speak-interiorize, as Derrida puts it. It is the gatekeeper of the body, the primary organ through which foreign objects are allowed to become part of our selves. From the baby’s initial cry, to its subsequent suck, mammals experience the world through mouth before anything else. As the locus of eat-speak-interiorize Psychoanalysts saw the mouth as metonymic of the ego. As Jean Luc Nancy put it:
There is – there once was – a mouth that opens and says: I write, I mask myself, I fabulate, I am my body, I am a man – always inextricably uttering: I take refuge in myself or I distinguish myself. The ego says: neither the presence nor the absence; neither the structure, not the feign of the subject – but the utterly singular experience of the mouth that opens and closes [itself] at once. A tongue moves there. (Jean Luc Nancy, Ego Sum)

The Talmud placed enormous on the mouth, as one would expect from the creators of the “Torah on the Mouth”, תורה שבעל פה. Often the tongue is described as an uncontrollable fiend, a loose and ferocious dagger which needs to be encased behind tooth and lip, lock and key:
R. Yohanan said: The Blessed Holy One said to the Tongue:
All members of the human body are tense, while you lie loosely;
all members of the human body are outside, while you are guarded inside;
not only that, but I surrounded you with two walls, one of bone and one of flesh; thus it says:
“What shall I do to you, and what more can I give you, O deceitful tongue?”
(Talmud Arakhin 16 quoting Psalms 120:3)

While the midrash focuses on speech, this could easily be said of eating too. The eating is by definition insatiable – for while the stomach that can be satiated, but never the mouth or tongue. The mouth is the locus of consumption, and on its own knows no limits. Indeed, as we’ve lost the effort that procuring and creating food once required - and with it all but lost the rituals of mindful eating – the mouth can easily be framed as the symbol of our consumerist selves.
But the claim that the body, mouth or tongue is inherently the enemy of the good doesn’t hold in most corners of Jewish tradition. Rather, the mouth is the primary site through which the self will show whether it chooses good or bad, life or death. As Rava puts it: When we seeks life – we do it with our mouth. When we seek death – we do it with our mouth. (Talmud Arakhin 15b).
Fittingly, Rosh haShana offers us many rituals of the mouth. Through eating, speech and sound, the mouth is placed at the center, inviting us to return to this most primal of organs, where our selfhood, indeed our very humanity, are epitomized. 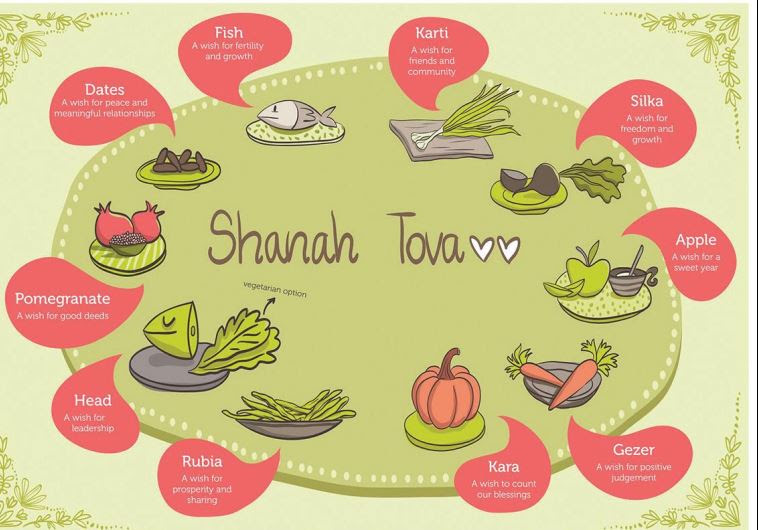 In the documentary film “Unknown White Male,” the protagonist loses his memory while on the subway, waking up in Coney Island without any recollections. In one scene two friends take him out to dinner, to eat all the things he never knew existed. Cheesecake, strawberries, sushi and steak ensue. Mango – who knew! I’ve always been jealous of the concept of being reintroduced to taste in such a manner.
Sitting around the Rosh haShana table, we place symbolic foods ripe with blessings for the new year. In a deliberate process, we taste the foods and bless the new year in their symbolism. Traditionally the site of numerous Hebrew puns, our family tradition has become to have guests bring an object – edible or not – with which to bless the new year. But beyond punning carrots and honey coated toddlers, there is an opportunity here to allow the first eating of the new year to help us reset the way we will eat this year. Hitting the reset button on ourselves begins with hitting the reset button on our mouths. Returning to the primacy of taste – sweet, sour, bitter – we make the tongue alive again, as if it was created anew today. Hopefully our own renewal will ensure.

Creation: Bridging the Chasm Between Speech and Action
Before creation, there was speech. God, in the Biblical story created the world through speech: “And God said let there be Light – and there was light”. This aspect was intensified by the Rabbis, becoming a key characteristic of God’s praiseworthiness: “Blessed is he who said – and the world was created” ברוך שאמר – והיה העולם. For the Rabbis the world was described as constructed of strings of words and letters, God’s speech projected eternally out into the cosmos, keeping all of creation in place.
If God is God in the aspect that his speech is his action, and his action is speech, what does that say about us? While we humans are differentiated from the animal kingdom thanks to our ability to speak, the fact that we are not yet Gods emanates from the all-too-human chasm between our speech and our action.
As we pour mountains of words about the new year we hope to enter, we are invited to ponder the gap between our statements and our actions. Seeking to walk in God’s path includes trying to better bridge the chasm between our speech and our actions. As creation by speech becomes renewed this Rosh haShana, we can pray to become renewed ourselves in the way our speech and our action correlate.

Shofar: Returning to the first voice

Before speech, there was voice. Speech is defined, but voice, like the cry of the newborn baby, says it all without reducing it to specifics. Returning to who we really are means trying to reach back to a place before words and vowels. Rosh haShana is called Yom Truah, יום תרועה, the day of Wail – usually understood as the wail of the Shofar. But the Torah also strangely calls it a day of Zichron Truah, זכרון תרועה – the memory of a wail. What is the wail stored in our memory above all? Perhaps it is that moment in which we were all mouth, emitting the vulnerable wail, full of potential. Zichron Truah, the moment in which we became an ego, yet also so dependent on mother (parent!) and world that we were truly “part of” more than autonomous egos. One hundred voices, one hundred wails. Will it be enough to bring us back to that initial moment, full of promise? Will it be enough for us to see others from that perspective, as creations who were once just mouth, a vulnerable wail? Will it be enough to remind the Creator that at our core, we are but vulnerable wailers, mouths calling out to reconnect to the source of good? As we lift the shofar to our mouths, lets pray it is.

Posted by Mishael Zion at 7:00 AM No comments: