Sandy and the Flooded Home: Heroic Avraham and Average Lot

To the speedy recovery of homes, families and utilities
in the wake of superstorm Sandy
Après le dèluge, after the natural disaster, begins the race among readers of holy texts to say something stupid regarding the “reason” for the suffering. This is especially tempting when the weekly Torah portion, VaYera, is the tale of the destruction of Sodom and Gomorrah. Personally, and at the urging of Maimonides (Guide 3:11), I find such explanations to be a desecration of God’s name.

Yet at the same time, reading the events of the week into the parsha in search of insight is one of the most important Jewish past-times, a way of fulfilling בכל יום יהיו בעיניך כחדשים– “each day, let the words be new in your eyes”. A delicate reading, searching scripture not for “why” but rather for “what now?” and “why am I feeling this way?”, is a more appropriate way to seek relevance in Torah. What happens when we read the “text” created by the events of this week in light of this week’s Parasha?
***
Without much more than a “trick or treat” knock at our door, Sandy’s waters and winds have rushed in, knocking out power, flooding homes, making cars float, shutting down mobility and washing people’s lives and belongings away.  Whether experiencing the flood firsthand or merely watching from afar, the images that have entered our screens and imaginations ignite one of the deepest human anxieties: that of the permeable home.
Like a child obsessively building sand castles and moats on the beach only to see them washed away by the ocean, we spend our lives striving to create a protected space in which the waters of the world will not be able to wash over us. We call that protected space “home”, as Maya Angelou put it, that “safe place where we can go as we are and not be questioned.”
For many it is only behind safe boundaries, inside the impermeable home (or in America, inside our car), that we can be ourselves. Nothing awakens the anxiety of permeability more than the image of waters seeping through homes. We feel penetrated and debased, and could easily turn inwards, shutting out all that washes over us.
Parashat VaYera is itself an exploration of the question of the impermeable home, in part through the idea of hospitality which weaves through the parasha. When a few angels come to visit Abraham and then his nephew Lot, we are exposed to two very different modes of hospitality. Comparing these two descriptions of hospitality (Bereishit 18:1-8 and 19:1-17) makes for a fascinating comparison. Lot – living in the soon-to-be destroyed city of Sodom – seems to be a most proper host, surrounded by evil men. His hosting is a very structured one, all about the dichotomy of in/out, culminating in a telling pageant around the door to the house ensues – the very symbol of the permeable home. He is clearly during the right things within a very clear structure.
Avraham on the other hand practices a “radical hospitality”. Old (and midrashically recovering from penal surgery) Avraham is described as “running” to bring food for his guests. There is no exploration of doors and boundaries here. In fact, there is no “in” – Avraham lives in an open tent. The midrash describes Avraham and Sara’s tent as open “to all four winds”, seeking to welcome guests regardless of where they come from. Far from a detail of nomadic architecture, Avraham’s tent has become the metaphor for Jewish hospitality and inclusivity. Avraham epitomizes this heroic unbounded existence.
Heroes often grab all of the attention, making the rest of us look bad. Caught between the heroic Avraham and the evil people of Sodom, how are we to carve a path for the rest of us? A mishna in Pirkei Avot explores this tension between the heroic, the evil and the average:
The first few categories are intuitive: the boor who doesn’t understand ownership and the evil one who claims ownership of all to himself. The hassid is reminiscent of our Abrahamic hero, self-effacing in favor of the other: the mishna commends him, but does not seem to expect this of the rest of us.
It is the last category which generates some debate: “Mine is mine, and yours is yours”. For the first opinion in the mishna – this is simply being normal. Deriving from a similar place as the anxiety of the permeable home, one can understand the need to “own that which is yours”. We like our personal space, in fact we need it in order to be generous to others – some would content. This middle path is not necessarily selfish; having a strong awareness of the boundary between self and other does not preclude Lot-style hospitality.
Yet for the opposing opinion “this is the characteristic of Sodom”. It is in this very average behavior that the seed of the most reprehensible evil lies. A hair-breadth separates the “normal” boundary of “mine and yours”, and a Soddom type existence of “homo, homini lupus”. But where does that difference lie? Rabbi Moshe Amiel, the 20th century Rabbi of Antwerp and of pre-state Tel Aviv suggests the following creative reading of this mishna, using the innocuous “one who says” and “some say” to make a point:
A society where each individual (“one who says”) says “that which is mine is mine”, and everyone simply provides for their own home, is a society of “average” qualities. […]
If however “some say” – in plural: if this basic selfishness becomes the quality of the entire society, then this is “the characteristic of Sodom”. (R. Moshe Avigdor Amiel, 1883-1946)

For Rav Amiel, what is understandable on an individual level – perhaps even necessary – cannot be contained on a community or government level. Institutionalized selfishness has a name: Sodom.
On any given day, New York City seems to be the city which perhaps best epitomizes “what is mine is mine, what is yours is yours”. Cramming yourself into a subway in rush hour is an exercise in having total boundaries with no dividing space. There is much generosity in the city, but it is usually of the Lot-type, strengthening the social structure, a far cry from Avraham’s open tent.
In light of a deluge on homes and boundaries, one could expect society to give in to its anxiety and build even stronger boundaries. In many ways, the social structure is playing out more powerfully than ever in light of Superstorm Sandy. But as is often the case when society faces its fragility head on, we are also seeing a coming together which is most exhilarating. In seeing that גורל אחד לכולנו – “we are all of one fate” – people have been transcending the usual boundaries, those walls and islands we create around ourselves. Victor Turner described this feeling as “communitas”, the receding of boundaries of self, status and society and creation of a feeling of togetherness. Avraham’s hospitality is communitas to the extreme, totally transcending the boundaries between self and other. But communitas develops quickly even among Average Joe’s and Jane’s if faced with the right circumstances. 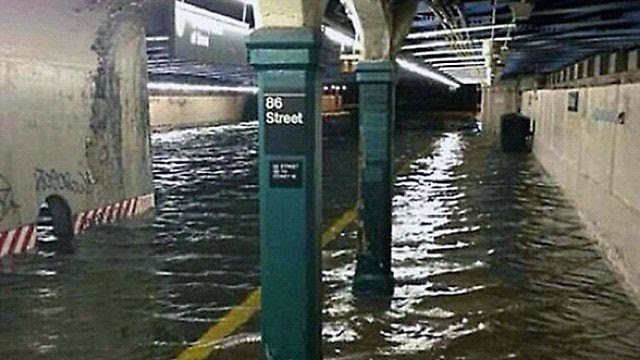 Sandy’s waters seem to have a sobering effect on our individualistic tendencies. For a moment, we are willing to be more generous with our boundaries. As the waters which made our homes permeable have washed through boundaries and undermined structure, so too people take less heed of impermeable boundaries. It is an opportunity for us to re-jigger our place on the spectrum between Lot and Avraham, to go beyond our average towards the heroic. In the coming days, as the waters and images of Sandy recede, society will probably revert back to the “average” of Lot. Structure will return, and with it the usual boundaries. But as we experience and discuss the events of this week, we should work in more of that Abrahamic anti-structure heroism into our average lives.

Posted by Mishael Zion at 8:07 AM No comments: