The Akeidah in Context: After What Events? 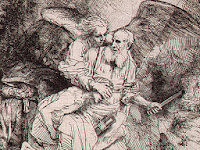 “Now after these events it was that God tested Avraham” (Genesis 21:1)
What events? What events could possibly serve as a pretext for sending a father to slaugh
ter his son? We usually dismiss the opening of the most intense story in the Torah as the Biblical version of “Once upon a time”. But re-reading the opening verses of the Akeidah one is struck by the exactness of the Biblical prose, more a poetry to be read slowly, with long pauses between the lines for maximum effect:

The Torah does not mince words, and while many readers of the Akeidah stress the irrationality of God’s commandment, emphasizing the lack of pretext for God’s call to offer-up Isaac as the real meaning of the “Knight of Faith” moment, some commentators have pointed at a specific act of Isaac’s parents as the impetus for the Akeidah, a mistake or sin which brought God to seek to “test” Avraham (or Sarah). In this reading, the terrible ordeal is not an act of religious courage, but rather the psychological penance of the sinner.
Uncovering their words shows us again how the Akedah is used as the threshing floor of ideas, ideologies and moral conflicts. Tell me how you understand the Akedah and I will tell you what your most basic beliefs are.
The Punishment #1: Pre-mature Peace
Rashbam, Rabbi Shmuel ben Meir, grandson of Rashi, is well known as the champion of “pshat”, the simple/literal reading of the Biblical text. This is how he unpacks our opening verse:
It is unclear from Rashbam’s interpretation what incensed God more – Avraham compromising over the promised land, a pragmatic move of the new father seeking to protect his son from war; or the cutting of a covenant with anyone other than God. In His anger, he punishes Avraham, “tormenting and taunting him” – with the test of the Akeidah. Rashbam doesn’t balk at Divine anger and torment - the religious meaning of the Akeidah for Rashbam is not to sacrifice one’s child - God never intended that as a holy act, rather the redirecting of Avraham from a covenant with Avimelech back to the covenant with God.
Alongside the ocntemporary political reading inherent here, I hear another point: Rashbam is highlighting the fact that Avraham lost his way, settled for less and compromised. He lacked the courage to “have it all” – a struggle many young parents face. While Rashbam’s God seems quite ruthless, it does provide a most powerful context for this test: Avraham, now a parent, is torn between his calling as parent, pragmatic leader and visionary careerist.

The Punishment #2 :The Ostentatious Bar Mitzva
Who do we celebrate with? Who do we invite into our circles of gratitude? For the Zohar, the edict of the Akeidah was given as a response to this question, decided in the heavens as Avraham and Sarah were celebrating Yitzhak down below. Focusing on a different “event” which preceded the Akeidah, the celebration of Yitzhak’s coming of age, the Zohar tells the following story:
In Avraham’s haste to leave the company of the unlucky and sterile as he joined the ranks of the successful and fertile, the great host relinquished his commitment to those less lucky then him – and with God. Perhaps, suggests the Zohar, forgetting God and forgetting the needy are the same thing. Only be returning to the prospect of losing everything can Avraham be brought back to being the person who loves God, and doesn’t turn a blind eye to those less fortunate than he.
The Punishment #3: Sarah and Hagar
Modern-day readers have suggested a third sin which the Akeidah might be a punishment for: the banishment of Hagar and Ishmael. Prof. Uriel Simon shows the many parallels between the two narratives: an edict banishing a son, preparations early in the morning, divine intervention saving the child from the father’s death-sentence, etc. Comparing Genesis 20 and 21 is an eye opening experience in Biblical literary parallels – perhaps it is after “Those events” that the Akeidah was decided upon? Avraham, claims Prof. Simon, must be taken through the same experience he inflicted on his “unchosen” child as a punishment for his behavior. If the above Rashbam can be read as a call to only focus on God/Jews, ignoring the other inhabitants of the land, Prof. Simon points us in the opposite direction.
In a similar vein, Rabbi Lynn Gottleib, in her poem “Achti” (sister in Arabic), turns our attention to the unsung victim of the Akeidah, Sarah, suggesting she is just as much the perpetrator of it. In Gottleib’s reading the Akedah serves as a punishment or re-education for Sarah, who taken through the process of losing her own son, realizes the pain and suffering she inflicted on her employee-turned-rival Hagar:
Only at the end
When I witnessed my young son screaming under his father's knife
Only then
Did I realize our common suffering.
Forgive me, Achti
For the sin of neglect
For the sin of abuse
For the sin of arrogance
Forgive me, Achti,


For the sin of not knowing your name.
Posted by Mishael Zion at 9:18 AM No comments: