At the Doorway: Kafka, Blood and the Passover Sacrifice

A few years ago I attended the Samaritan paschal sacrifice. Numbering 745 members, the Samaritans are an ancient non-Jewish ethnic group, split between Nablus and Holon, who continue their version of Biblical traditions. On Passover this includes joining together on the 14 of Nissan dressed in white with lambs at their side. The orally recite the Biblical Exodus narrative, and then summarily slaughter their lambs and roast them in large pits. The lambs are to be eaten precisely at midnight, the very hour the Israelites left Egypt oh so long ago.
I came expecting to be troubled by the violence of the slaughter. What I experienced instead was a strong embrace of mortality. The sight of blood is troubling not only because of its violent and ethical dimensions, but because it reminds us of our own vulnerability. No wonder we associate with it feelings of disgust and refuse. Witnessing this gory but powerful ritual was transformative. I was raised a devout believer in Maimonides’ theory of sacrifices being a “phase” the Jewish people had to grow out of. While I still believe in some version of Maimonides’ post-sacrificial narrative, I was deeply moved by the rawness of the sacrifice: I was in awe of the inescapably real presence of blood.
I think of the Samaritans as we read in this week’s Parsha, Bo, of the Israelites preparing to leave Egypt. They are commanded to not only slaughter a lamb but to smear the blood on their lintels and doorposts:

The blood on the doorpost separated between life and death. The embrace of vulnerability and mortality, through a public act of blood, differentiated the Israelites from their persecutors, and granted them the key to redemption.
We no longer smear blood on the doorpost, but a strange little custom continues to re-create a sense of vulnerability on Passover: First born children traditionally fast on this day. They should have been killed with the other first-borns that night. The fast is a way of entering Passover not as victorious winners but through a humble recognition of the vulnerability of life.
In his Hasidic commentary of the Torah, the “Sfat Emet”, Reb Yehuda Leib Alter of Ger, also reads this moment as an embrace of vulnerability. He notices that the blood on the doorposts is applied by a “band of hyssop” – which the midrash considers a “most lowly brush”. The primal mixture of blood and brush represents the embrace of mortality, which in turn enables the promise that is to come:
Even though they went out from Egypt with great victory, God wanted Israel to be in their own eyes like that band of hyssop, to know that they were just at the open doorway, hoping to truly come inside. As if God says to them: “Make an opening as wide as a needle’s eye, and I’ll open it up for you like the entrance-way to a palace.” This took place at the Exodus from Egypt, just like the opening of a doorway.
Then it is written: “The king has brought me into his chambers” (Song of Songs 1:4), referring to the giving of Torah.

Standing at the doorway of the Exodus, a modern reader might be reminded of Kafka parable, Before the Law, which starts like this: 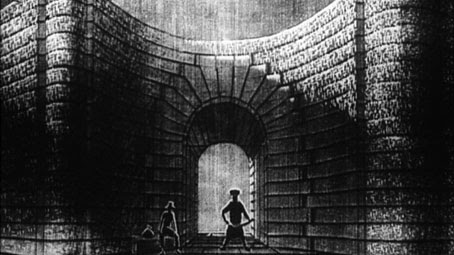 Before the law sits a gatekeeper. To this gatekeeper comes a man from the country who asks to gain entry into the law. But the gatekeeper says that he cannot grant him entry at the moment. The man thinks about it and then asks if he will be allowed to come in sometime later on. “It is possible,” says the gatekeeper, “but not now.” The gate to the law stands open, as always, and the gatekeeper walks to the side, so the man bends over in order to see through the gate into the inside. When the gatekeeper notices that, he laughs and says: “If it tempts you so much, try going inside in spite of my prohibition. But take note. I am powerful. And I am only the most lowly gatekeeper. But from room to room stand gatekeepers, each more powerful than the other. I cannot endure even one glimpse of the third.” The man from the country has not expected such difficulties: the law should always be accessible for everyone, he thinks, but as he now looks more closely at the gatekeeper in his fur coat, at his large pointed nose and his long, thin, black Tartar’s beard, he decides that it would be better to wait until he gets permission to go inside.

The man ends up wasting his life away at the doorway of Law never daring to enter for fear of the dangers inside. The Exodus’ doorway, on the other hand, covered in lamb’s blood, serves as a reminder that an embrace of vulnerability and danger is what allows one to move forward despite the dangers that will surely ensue.
I return often to that day with the Samaritans, reminded of the symbolic power of blood as a symbol of vulnerability, which opens a doorway to growth and purpose. In a world where blood is quickly absorbed, meat arrives in nylon wrapped packages and our sick and dead are sent away to the outskirts of town, we desperately try to do away with our mortality. But the gateway to purpose and meaning (=Torah) is a doorpost smeared in blood. As weird as that sounds, I wouldn’t have it any other way.

Posted by Mishael Zion at 2:04 PM No comments: