Sukkot in the City: In Pursuit of Happiness

Once the holy Rabbi Yehiel Michel of Zlotshov
asked the holy Rabbi Zvi of Ziditshov
to speak to his son, who was experiencing a bout of melancholy, and rebuke him.
Reb Zvi spoke to the son, saying:
“Why it says ‘Serve God’, and with what? ‘with Joy’! (עבדו את ה' – בשמחה)
Because joy is in itself an avodah, a practice all of its own.”
And when the holy Rabbi Reb Michel, who was dropping by, heard this he said:
“Surely this is how they interpret this verse in the heavens!”
The Teachings of the Magid of Zlotshov, pg 287 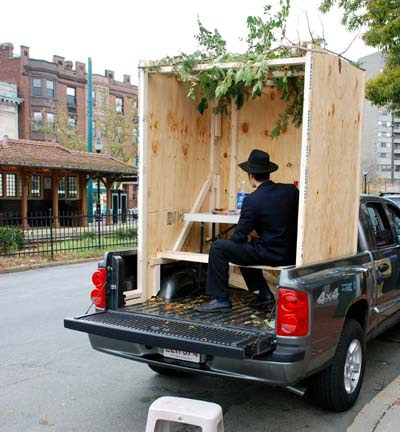 Sukkot in Manhattan is quite the anti-climax  The Sukkahs are few and far between, squeezed in between skyscrapers and dank courtyards, while the threat of rain looms constantly overhead. When our ancestors celebrated the harvest season by living in field booths for a week of festivities, they imagined the cool relief of the Mediterranean fall, not the real estate realities of the urban jungle.
This is quite a let down for the holiday branded as “the time of our joy”. Between celebrating the harvest and feeling relieved at surviving the Days of Judgment, joy is the centerpiece of Sukkot, as the Torah commands us regarding Sukkot: ושמחת בחגיך... והיית אך שמח – “You shall rejoice in your festival… and you shall have nothing but joy” (Dvarim 16:14-15).
So this year, unable to experience the commanded joy in a Sukkah of my own, I turned to the texts about joy and Sukkot, hoping that the old Jewish motto of “can’t do it, at least study it” will hold true yet again. As the Hasidic story above recounts, joy is in itself an avodah, a practice. One must seek out the way to be joyous beyond the circumstances.
Joy, like all things, has a history. An attempt to write the Jewish history of joy might start with a debate about the relationship between commandments and happiness, or between joy and responsibility (as my teacher David Hartman put it). Are mitzvot there to be enjoyed? The Talmudic sage Rava doesn’t think so, as Rashi embellishes: “Mitzvot were given to be a yoke around people’s necks” (Bavli Rosh haShana 28a). But many disagree, in a position best articulated by Rabbi Vidal of Toulouse, a 14th century commentator of Maimonides. In describing the joy of Sukkot, Vidal gives a stirring account of how the relationship between joy and responsibility works:

What makes a certain action a joyous one? Vidal’s point is not that in fulfilling obligations one should find joy, rather he is making a philosophical statement about the relationship between joy and truth: doing the good because it is good is the very definition of joy. As Aristotle put it: Happiness is the "activity of the soul expressing virtue." While the more utilitarian pleasure can be found in all manners of behavior (and is perhaps correlated to the immoral, as Proverbs 9:17 says: “Stolen waters are sweet”), joy is manifest when “the good is done because it is good”. Joy is dependent not only on the action, but on the intention of the action as well. When intention and action are aligned with truth, joy is present.
There is something slightly ironic about this idea: As in the Hasidic story, joy has become work. Unlike pleasure, which smacks you in the face with its plastic joyfulness, true joy requires a process of philosophical discernment. For those in search of immediate gratification, this is a poor man’s joy (although read any of Michel Houellebecq’s novels and pleasure-driven joy seems even harder to sustain). For those with the patience to stick around for the deeper (true?) joys of life, Vidal’s statement seems to hold true. Anyone who has changed a leaking diaper at 4am knows that true joy is linked not to immediate gratification, but to responsibility and relationship: choosing the truth because it is true.
Indeed, I find Vidal’s words to be useful in thinking about all our various universes of obligations – professional and personal, as citizens, family members, human beings. Of the many things we dedicate our life to, and find pleasure in, some are transient and fleeting, and others are real and true. According to this reading for Sukkot, by taking the roof off our heads for a week we are invited to refocus on those things we do because of their inherent good, deprioritizing those obligations and actions that give reward which is fleeting.
Towards the end of his statement, Vidal throws in not only fulfilling mitzvot, but the “study of Torah and wisdom” in particular. How did intellectual pursuit get in here? Because learning is about a dedication to identifying the “good in so much as it is good”, and doing the internal work to be able to sustain this wisdom into a lived path.
This is where the joy of Sukkot and the joy of Simchat Torah flow into each other. Our joy on Sukkot is about clearing out the transient in order to recognize the “real”, and the joy of Simchat Torah is about being a community that places the pursuit of Torah and wisdom at the center of our existence. Luckily, dancing with Jews and scrolls can be done even without building a Sukkah.

p.s. The story quoted at the top actually marks a significant shift in the Jewish history of happiness. Hassidut created a shift from saying that one must perform mitzvot with joy, to claiming that joy is a mitzvah of its own accord. This radical shift is mostly unaccounted for in previous texts, which is perhaps what requires Reb Michel to say “this is the commentary given in heaven”, since basically no Jew on earth would have read it quite that way until their generation… Modern historians of happiness record the same shift in 18th century Enlightenment philosophers: Happiness as an end in itself is the zeitgeist of modern times.
Here’s the original Hebrew for those who enjoy it:
פעם אחת ביקש הרב יחיאל מיכל מזלוטשוב
את הרה"ק רבי צבי מזידיטשוב
שיוכיח מעט את בנו הרה"ק רבי זאב מזבאריז
שיש לו מעט מרה שחורה.
הלך אליו ודיבר עמו, בתוך הדבירם אמר לו:
"עבדו את ה'", ובמה? "בשמחה"
כי שמחה היא עבודה בפני עצמה.
והרה"ק רבי מיכל בא באמצע הדיבורים ושמע זאת ואמר... כך מפרשים בשמיים!
תורת המגיד מזלאטשוב, תשנ"ט, עמ' רפז

Posted by Mishael Zion at 8:18 AM No comments: