Thou Shalt Donate to Overhead Costs: The Commandment to Keep the Lights On

Twenty years ago, my grandfather asked me to mail some charitable donation cheques for him. I noticed the words “earmarked for overhead costs” on one of them and asked him about this. He answered with his typical evasive smile: “Well, we are Levites.”
I was confused. I already knew we came from the Tribe of Levi, and it was a fact I mostly resented. The underappreciated cousins of the Cohens – or Kohanim, that priestly tribe descended from biblical Aaron who star in this week’s Torah portion of Tetzaveh — we Levites were consigned to washing the priests’ hands. If the Temple were ever to be rebuilt, my career prospects hit a glass ceiling as glorified song leader, lyre in hand. Levites are the Art Garfunkel of the Jewish tribes.
In any case, what did this have to do with overhead costs?
When I pushed him, my grandfather said that, as a rabbi, social worker and activist, he had gained insight into the challenges of communal service. And as a Levite, he had a “genetic appreciation” for the gray work of communal professionals. Since he saw how others underappreciated these professionals and the true costs of doing communal work effectively, he felt it was his responsibility to donate specifically to overhead expenses.
I recalled this tale last summer when the usually sleepy nonprofit world was rocked by a campaign to “Debunk the Overhead Myth.” The leaders of the country’s three leading sources of information on nonprofits – GuideStar, Charity Navigator, and BBB Wise Giving Alliance rolled out research and analysis proving that, counter to popular belief, “overhead is a poor measure of a charity’s performance.” While 62 percent of Americans believe that a typical charity spends more than it should on overhead, they recommended that “charities should spend more on overhead” in order to be healthy and effective. Instead of ferreting out miniscule overhead percentages, donors should focus on a nonprofit’s “transparency, governance, leadership and results.”
To this formidable campaign I contribute the modest offering of biblical precedent: “The Commandment of Donating to Overhead.” This week’s Torah portion of Tetzaveh, which discusses the role of the priests in the Tabernacle, opens with the following commandment (Exodus 27:20-21):

The Torah commands the Israelites to “keep the lights on” in the Tabernacle. Of the many donations the people of Israel are asked to make to support the sanctuary, this is the only one that is required on an ongoing basis.
Fittingly, this commandment became an actual “law for the ages,” long after the Temple in Jerusalem was destroyed in 70 C.E. An ancient rabbinic commentary makes the shift clear:
Even though the Temple has been destroyed and its candles extinguished, there still stand houses of prayer and houses of study, and in them in we must light candles, for those are called “micro-temples” (Midrash Ha’Gadol, Leviticus 6:2).
אע"פ שחרב המקדש ובטלו הנרות,
הרי בתי כנסיות ובתי מדרשות שמדליקין בהן והן נקראים "מקדש מעט",
שנאמר: "ואהי להם למקדש מעט" (יחזקאל יא:טז)

In Jewish communities throughout the ages, the commandment of “keeping the lights on” became one of the most powerful guiding principles. In every community — from 11th-century Spain, through 16th-century Italy, to 19th-century Lithuania — associations were formed whose key mandate was to fundraise for the oil to illuminate the sanctuary and other overhead costs. It comes as no surprise that their names were usually taken directly from the biblical verses quoted above: “Shemen la’Maor” (Oil for Lighting) or “Ner Tamid” (the Constant Candle) 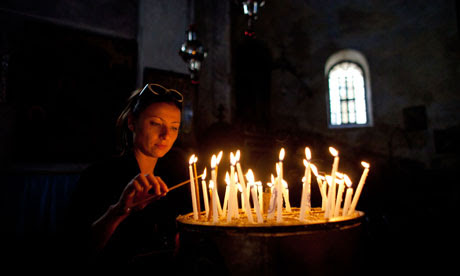 While in the Jewish world the personal touch of candles has been replaced by electricity, visiting the sanctuaries of other religious communities reminds us of how this commandment continues to be played out literally in some churches and temples, where devotees bring candles and light them in the sanctuary. This individual, humble and illuminating act speaks volumes of the individual responsibility to keep our communal institutions running.
Not as directly illuminating as the candles — nor as humble — the plaques at the entrance to our communal institutions also remind us that these institutions depend on our donations. But while the appearance of these plaques might lead us to believe that the responsibility to sustain our institutions lies primarily with the wealthy, the candles remind us that it is up to each of us to contribute to the effort. Indeed, in one synagogue in Jerusalem every lightbulb is donated by a different member of the community!
So how does the commandment to donate oil to the Temple play out today? An individual obligation towards overhead costs for those communal institutions we believe in seems like a good first step. But where else can we make a difference in supporting the work of the modern day priests (and Levites!) who toil in the sanctuaries of our communal institutions – Jewish, urban, civic… to make sure the lights are kept on
from sunset until daybreak…
Shabbat Shalom,


Mishael
Posted by Mishael Zion at 1:54 PM No comments: