Home for the Holidays | Moonshine for the Month of Kislev

As the weather turns colder, the gaze turns inward. This year’s month of Kislev is bookended by the
two holidays of the hearth and home: Thanksgiving and Hannukah. As myriads travel “home” this week for Thanksgiving, I wonder what makes a home worthy of its name.

I’ve been pondering this question as I’ve found myself moving back with my own family to the same neighborhood in which I grew up. As I walk down the familiar streets of Talpiyot in Southern Jerusalem, I keep wondering: after all these years, does it still feel like home? And more importantly – why do I care? As Viennese philosopher Jean Amery asked it: “How much home does a person need?” Why does this question keep cropping up in my life, even as our ultra-portable wireless lives seemingly allow us to feel at home anywhere in the world?
This question also underlies two issues in the headlines. As the United States allows millions of illegal immigrants to functionally call America their home, one wonders defines “home” and who gets to define who is at home and who is “alien”. As Jerusalem is plunged back into violence and a deep lack of personal security, the pat answer of home as a place of refuge and safety is undermined. Strangely, despite the lack of security – the sense of home goes unscathed, as it had in previous periods of fear. Home as safety is an aspirational, but insufficient, answer. I am sent scurrying for other definitions. This is where “A Bride for One Night: Talmudic Tales” by Ruth Calderon found me. In her explorations of Talmudic narratives, she keeps returning to stories focusing on the home, turning it into my recommended book for this stormy month of Kislev.

Rav Hama went and sat for twelve years in the study house. When he planned to return home, he said “I will not do what Ben Hakinai did [and surprise my wife after all these years]”.
He stopped at the local House of Study and sent a letter to his wife.
His son, Oshaya, came and sat before Rav Hama in the House of Study.
Rav Hama did not recognize him.
Oshaya asked him many questions of law. Rav Hama saw that he was a brilliant student, and grew faint, thinking: “If I had stayed here, I could have had a son like this.”
Finally Rav Hama returned home. Oshaya entered behind him.
Rav Hama stood before him, thinking: Surely this student is coming to ask me another question of law.
His wife scolded him: Does a father stand before his child? Do you not recognize your own son?
(Babylonian Talmud Ketubot 62b)

Seemingly a tale of a Rabbi over-zealous in his studies, so lost in his Yeshiva he doesn’t recognize his own progeny, this story easily evokes questions much closer to home. In our zeal for a professional life, committed as we are to the demands of a successful career, do we find ourselves not recognizing our own children as they grow up? 12 years or 100 hour weeks, postponing family until one becomes Rosh Yeshiva/partner/tenured professor, these questions are the clichéd conversations of our generation, and yet balance alludes us. The Home and the House of Study compete – can we have it all?
Rav Hama’s story is another version of the “treasure was at home” tales, as in Paulo Coelho’s The Alchemist or Reb Nachman’s tale of the Treasure under the Bridge. Hama discovers that what he really wanted all along was to have a son learned in Torah, not just to be a scholar himself. That son was waiting for him at home all these years, ignored. Seemingly Hama has attained both of these by the end of the tale – he is a great scholar, and so is his son, Oshaya. He went on Odysseus’ journey and returned victorious. Yet standing awkwardly in the kitchen, father and son face eachother in formality, not intimacy. The journey was a failure if one is unrecognizable in your own home.
This story captures the essence of home as being known, familiar, comfortable, intimate. Home is where the guards can be put down, where you don’t have to explain yourself, where one is understood. Hama lost that familiarity with his son – and thus lost it with himself. “How much home does a person need?” None, says young Hama, leaving for twelve years. Home is where I am least understood, says the adolescent scholar, and goes. Only upon returning home, a decade and more later, does he understand just how much “home” was missed. The journey itself, the process of exile and return might be necessary, but there is a limit: the journey away from home must end before alienation sets in.
One post-script: The missing chapter about Rav Hama is the one I am most curious about. Did he stay home? Did he rebuild his life at home, or did the Yeshiva beckon him to return to his wanderings? The drama of return often gets the headlines, but it is what we build once we’ve returned home that is most challenging. That is the challenge we face today.
May this month of Kislev be a month of regaining home-hood: being understood, feeling known, being safe.
Hodesh Tov,
Mishael 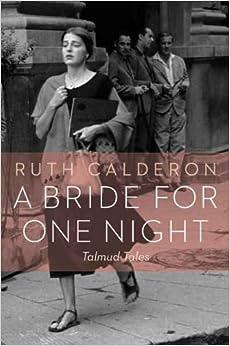 Ruth Calderon, the public face of the new Jewish House of Study, even bringing Jewish text to the Israeli Knesset, had her book of Talmudic stories come out in English this year. Aided by Ilana A Bride for one Night” Calderon takes 17 Talmudic tales, lays them out for the reader to study themselves, then gives her own prose re-telling of the tale before unpacking it more analytically. Rabbi Hama makes an appearance, as do some other Bronfmanim favorites like Resh Lakish, Shimon bar Yohai and Elisha ben Abuyah. It is the best book currently out there to recreate or share with others the joy and passion of Jewish text study.
Kurshan’s (‘95) fantastic translation, Calderon brings the Talmud to life in all their “color, their daring and their drama”. In “


Read the introduction and first chapter in this free pdf, or order the book itself.

Dedicated to a theme in the Jewish month, Moonshine is a combination Dvar Torah and springboard for learning in the coming 30 days. Moonshine - in honor of the Hebrew month’s commitment to the lunar cycle, with a hint of distilling fine spirits off the beaten track and - perhaps - intoxication.
Posted by Unknown at 2:56 AM No comments: