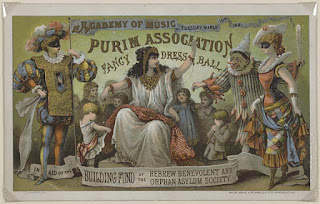 Chapter Four. A man walks through the city streets, wearing sack cloth and ashes. His entire people have just been sentenced to death by the Grand Vizier. They are to be killed in a day of public violence - in an empire that prides itself on its multiculturalism. And in a twisted way, it is his fault. A long, bitter scream emits from his mouth.
Chapters Eight & Nine. The same man walks through the city streets, dressed in blue sash and organdy, himself having become the Grand Vizier. He is celebrated by all, much loved and appreciated. This time it is his people who will be performing the public violence, killing all those who sought to destroy them.
And we celebrate all this in two days of costumes and noisemakers. No wonder Martin Luther declared that Jews “love the book of Esther, which so well fits their bloodthirsty, vengeful, murderous greed and hope.” (“On the Jews and Their Lies” 1543)
Luther’s anti-Semitic criticism of Esther and of us, her people, is ridiculous and chilling, precisely because Esther is a tale of power and powerlessness writ large. Esther is unafraid to play out two pathologies of power: the pathology of total disempowerment of a minority vulnerable to violence in Chapter 4, and the pathology of total power turned into minority-inflicted violence in Chapter 9 (thank you Yehuda Kurtzer for this succinct distillation). These two chapters make battle in our public discourse constantly: are we living in Chapter 4, the year is 1939, and an Iranian Haman is out to get us while world leaders are busy getting drunk? Or, alternatively, are we living through a new version of Chapter 9, with Jewish power reigning like never before both in our majority-land and our minority-empire, allowing us to get away with questionable moral actions in the name of self-defense?
And just like that, this silly children’s fable has pulled us into dealing face to face with our deepest, darkest fears. Be it violence, power, exile, sex, gender, drink – Esther lures us in with its fancy costumes and silly pranks until we find ourselves talking about the most pivotal issues. As I am in the process of writing a cultural commentary about the Scroll of Esther, its becomes increasingly clear to: Esther Now.

Esther Now
More than the grand tale of leaving Egypt, more than the human moments of Abraham and Sarah, more than the grand visions and rebukes of the Prophets, it is Esther that is the most relevant book of the Bible.
Esther Now because it is the book of Jewish power and politics, and of Diaspora and disempowerment. It is the book of getting a seat at the table – and the prices we’re willing, or unwilling, to pay for that seat. It’s the book where the personal is the political and the political is the physical. It’s the book of gender, identity, political violence, sexual violence, success, individualism and calling. It is also the book of unknowing (but that’s for next week’s essay).
Esther Now because hers is the last book of the Bible, conceptually and chronologically; the scroll that bridges between the God-infused world of the Bible and the God-vacant world of our reality. No wonder the Rabbis read it as a “second Sinai”. It is the closest Biblical book to our contemporary reality. “We are all servants of Ahasuerus now” (Talmud Arakhin).You are free to read God into the tale if you want, seeing providence and prayer and calling as real agents in the world, but even then, you are a servant of Ahasuerus.
Esther Now because we are living through the tale of the greatest Jewish Diaspora to ever exist, in an empire of 50 states with its political pageants and Jewish courtesans. That other Jewish Diaspora, with its 127 states, places a funhouse mirror through which we can reassess ourselves.
Esther Now because the story is a farce, a parody, a carnivalesque fast paced streaming series of beltway politics of the type that has become so popular of late. But it is through farce that elephants in the room can be unveiled.

Who will Esther 2016 Be?
Each year, Purim invites the pundits to compare the current political reality to the story of the megillah. Last year it was all about Iran, with its Persian echoes. This year its going to be the Presidential Candidates (although I’d love to see a thoughtful comparison to the Supreme Court, contrasting Shushan’s farcical court of seven advisers who “know all rules and regulations” and who step in when a dispute arises between the bodies of power in the Capital to the nine wise-people of DC (oops, eight…)).
Theoretically, DC couldn’t be further afield from Shushan. If anything, DC is Shushan after Mordechai’s rise to power. Of the four (current) front runners in the presidential campaigns, one is Jewish, the other sees zealous support of Israel as a central tenant of his faith, and two have Jewish sons in law. We’ve never been closer to the king, who himself celebrates Jewish rituals in his home.
On the flip-side, we’ve also sensed how a surprising candidate out of left field, touting ego, money and race-baiting can turn a whole empire on its head. We’ve felt the chilling realization that it can happen here too (but not in Canada). Perhaps as minorities, our situation is more precarious than we are willing to admit to ourselves. Maybe Chapter 4 is not just history, perhaps it is a most probable future, if not to our minority than to those around us.
On the flippity flip side, perhaps it is in our unprecedented and quite sudden power that the greatest threat resides. Not the threat to the Jews, but the threat of us as Jews, or our brethren, using power to make others cower, bow and prostrate.
Flip side again, perhaps this attempt to translate a 2000 year old political metaphor into contemporary reality is a futile experiment.  Let’s stick to a close textual reading, and see what we can make out it. It is those close readings that remain real in the long run, even as the political envelope keeps going topsy turvy.


All this should be sufficient to say that Esther merits a close reading this year, one which I hope to share with you in the coming weeks. To be continued…
Posted by Unknown at 3:27 AM No comments: