Light, Darkness and other Religions: Thoughts on the 8th Night of Hanukkah 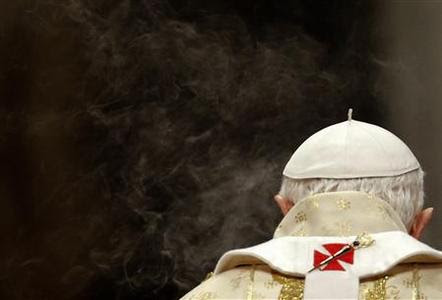 Driving down the streets of Manhattan after Shabbat, I was struck by the sight of hundreds of Protestants walking towards the Cathedral for Midnight Mass. I returned home to discover Catholics had lined the sidewalks outside my house waiting to enter a local church. There’s something very moving about seeing people go to shul.
With Chanukah candles in some windows, and Christmas trees in others, December in America lends itself to mushy ecumenical statements of “hey, we’re not so different after all”. I believe the differences between religions and identities are critical, but pointing out the shared moments is just as important.
This week, as the pope bemoaned the fact that “the superficial glitter” hides the real meaning of the religion and its values, I too was nodding: "Today Christmas has become a commercial celebration, whose bright lights hide the mystery of God's humility, which in turn calls us to humility and simplicity." The Pope was calling it the way it is: out of the legitimate desire to turn Christmas into a less religious day and more of a “one size fits all” December holiday, the deeper meanings of the day are often lost. It’s good to have a day to celebrate family, and exchanging gifts is a great way to strengthen relationships. I also find value in families of diverse religious backgrounds finding creative ways to showcase their complex identities in their homes. But rituals and holidays have deeper meanings and statements that can easily be lost if there is nothing but glitter and gift wrapping, and it is up to us to infuse our rituals with the deeper meaning, values and narratives we wish to give as a gift to ourselves this year.


The Masculine Dilemmas of the Partnership Minyan


Published in the Forward, 30 December 2011, this is my review of:
The Men’s Section: Orthodox Jewish Men in an Egalitarian World
By Elana Maryles Sztokman

Read more: http://www.forward.com/articles/148302
A few years ago, a friend announced that he intended to start a “Kiddush club” at our synagogue. “Our shul needs more of a social scene,” he declared, “and some high-quality single malt whisky!” he added jokingly. I was vehemently opposed. Our synagogue is a “partnership minyan,” which seeks to maximize women’s participation in the prayer service within the bounds of Halacha and the Orthodox community. A Kiddush club smacked to me of a classic patriarchal construction, a complete contradiction of our attempt at re-aligning the gender dynamic of Orthodox synagogue life.
I was thinking of this exchange as I was reading Elana Sztokman’s new book, “The Men’s Section: Orthodox Jewish Men in an Egalitarian World,” an ethnography of men in partnership minyanim. Sztokman asks a fascinating question: What do the men get from it?

As Sztokman describes at the beginning of the book, the partnership minyan phenomenon started in 2001 with two small minyanim in Jerusalem (Shira Chadasha) and New York (Darkhei Noam). Those two are now regularly attended by hundreds every Shabbat and have prompted 25 other such minyanim in places as far flung as Melbourne and Beersheva and as traditional as Skokie, Ill., and Englewood, N.J. At these minyanim, women and men share equally in Torah reading and speaking before the community, and women lead some parts of the service — but men and women are separated by a mechitzah, the barrier between the genders that is the hallmark of an Orthodox synagogue. While still considered anomalous in the eyes of most of the Orthodox community, partnership minyanim are no longer beyond the pale.

Hanukkah and the Battle for Re-Interpretation

Posted by Mishael Zion at 4:19 AM No comments:

This week and next, our Israeli Bronfman Fellows (or Amitim, as we call them) are visiting New York and Boston. This “reverse-Birthright” is a powerful experience for the seventeen year old Israelis as they explore what it means to be Jewish in America, and what that inspires in them regarding Israeli Judaism.
In this week’s parasha, VaYeshev, another seventeen year old, Joseph, is sent down to Egypt as a   prisoner. He will quickly turn into a prince and beckon his family to leave the land of Israel and join him in the goldene-medine  of Egypt.
With all the hullabaloo around the Israeli Government’s advertisement campaign guilting Israelis who left for “Egypt” to come home, I was especially curious to see how the Israelis would respond to visiting America around Christmas-time. Today, as they visited Rockefeller Center (to discuss New York City as a “modernist project” through Jose Maria Sert murals and the Atlas statue), they were totally taken in by the charm of Salvation Army bell-ringing and mid-town Christmas Markets. Standing by the Christmas tree, a religious amit began arguing with his secular counterpart who was jumping up and down to the music: “You see, this is why secular identity doesn’t stand a chance outside Israel: One Christmas song and you’re a goy.” The secular amit stopped dancing, looked his religious friend in the face and said: “I speak Hebrew, so I’m safe. It’s the Americans who should worry.”
Their argument reminded me of a passage in a book by Fania Oz-Salzberger, Israeli author Amos Oz’s daughter and a scholar in her own right. She wrote a fascinating book about the experience of Israelis in Berlin, and writes insightfully about the Israeli yearning for Europe (or “hutz la-aretz” – anywhere outside Israel) and the charm of Christmas. Like the secular Amit, her reflections bring her to suggest that Hebrew is enough to sustain a Jewish identity:
There is something misleading about our [=secular Israelis'] Mediterranean yearnings to the north-European winter. Europe was always described to us in a foresty-green color, wet with rain, with all kinds of red and purple berries and spotted mushrooms. Or dressed in soft snow and stillness under a distant blue sky.
But no: It's grey here, and wet. No colors either…
And maybe because of that their Christmas is so assertive, so colorful and protestful. In the market along Berlin’s Unter-Den-Linden, one of the many markets that is filled with holiday decorations, sweets and tiny Christmas trees, over a cup of mulled wine, I suddenly find myself thinking about my fathers-fathers and my mothers-mothers - stiff necked and stubborn in the European winter. How did those generations and generations of Jews survive these sad northern winters, passing by the holiday markets on a daily basis, with their finely decorated evergreen trees; passing by those candies and sweets; walking, with their children holding their hands, past the Goyim's holidays and banquets… and not be tempted?
Only at the very end of that long road, the Berlin Jews gave in. Gershom Scholem's family already celebrated Christmas, with a nice "roast duck or a rabbit", and a decorated tree taken from the market by the Church. A German folk holiday, which you celebrate not as Jews but as Germans.
But that wasn't the end of it, because Scholem spoke clearly on a different matter. Maybe he didn't mean to, but he and Bialik and Agnon made sure that lost Jews like myself can never just get swallowed and disappear, never to return again. Because Scholem and Bialik and Agnon cast this wicked spell on us heretics, so that even after our mistaken ways have led us back to this European world, and we were tempted towards those Christmas markets and ski trails and beaches, and after we became pagans and "Canaanites" and "stam Hilonim" – simply secularist – we still will never be able to get rid of the book-bag on our backs. For even after we cast out the Yiddish, we are still prisoners of the Hebrew language, and through our Hebrew we will forever be the prisoners of memory. And through memory we will be prisoners of the duality, of multiple worlds…
Because we'll always be carrying those books on our backs.
Fania Oz-Salzberger, "Israelis in Berlin" | Keter 2001 (Hebrew), pg. 74-77

What is that wicked spell of Hebrew? Does it really need to be Hebrew literacy, or is being literate in Jewish texts enough to become a “prisoner of the duality” that Oz-Salzberger claims to be the essence of a Jewish identity. Couldn't this “book bag” vision of Jewish identity work be being an English speaking Jew who is equally connected to Jewish texts and learning, or is the language necessary for the spell to work? What building blocks are required to create a robust Jewish identity when “Jingle Bells” and “Noel” are playing in my ears? (yes, I’m writing this sitting in a Starbucks café…)
I have no answers, only questions. Yet as much as I happen to love prayer, a synagogue community and talk of God, my hunch is that it is a rich cultural Judaism, a "book bag" Judaism, which secular and religious alike can enjoy, that holds the key to the spell binding nature of Jewish identity. But it'll take a whole lot more work...
With Joseph in the parsha and Christmas cheer all around me there is no better time to ponder the secret to creating a spell-binding Jewish existence in Israel and in America. At least this is an advantage to being a Diaspora Jew – as one of the Amitim put it today: In Israel I never have to actively give meaning to my Judaism – here I do.
Posted by Mishael Zion at 7:45 PM No comments:

Shimon and Levi: Navigating the Dark Side of Biblical (and Modern) Justice

Posted by Mishael Zion at 2:47 PM No comments:

No Easy Answers: Seeking a Path of Integrity

Read this, past and future BYFI Divrei Torah on our Blog: Text and the City

Posted by Mishael Zion at 1:50 PM No comments: